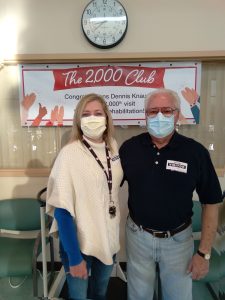 Longtime Lincoln native Dennis Knauer, 78, just finished 2,000 sessions of cardiac rehab and is a passionate believer in the program for short-term recovery from cardiac-related health issues and long-term health.

Knauer has lived in Lincoln for the past 60 years. He worked as an Illinois territory manager for Dixon Industries, but his life changed forever in 2001 when he had triple bypass surgery.

Knauer kept exercising week after week, going on to complete Phase II and Phase III of the program, but he didn’t stop there. Now, 20 years later, Knauer has completed more than 2,000 sessions of cardiac rehab – a record!

Penny McIntosh, RN, cardiac rehab, says Knauer is the only patient she has seen hit 2,000 visits. In fact, Knauer has been coming to rehab longer than McIntosh has worked in the program.

“I met Dennis in cardiac rehab. I have been in this area for about 18 years, and he was here when I started,” McIntosh says. “He has been a very faithful attender. It definitely crosses over to being more than just a patient/nurse relationship. We do become friends with these folks who come regularly. We see them in the community. They are more than just patients. We care about each other.”

Knauer works out three times a week on average. He likes that they monitor his blood pressure, track his progress and offer a variety of equipment for workouts.

Mark Craig, exercise physiology coordinator at LMH, says the sessions leave you with more than just a healthy heart.

“I think people continue to come back because of the relationships they develop here with their classmates,” he said. “They come in, and many of them have had a heart attack, so they come in here hurting. Lincoln is a small town, less than 20,000 people. Everybody knows everybody, and they get these shared experiences. It’s more of a family feel than going to the gym. I think that’s what keeps people interested.”

The cardiac rehab program helps patients regain strength, energy and confidence as well as relieve stress and anxiety. An added benefit is the strong bonds that develop with staff and other participants.

“The program gets you up and moving, especially in the winter when it’s easy to lay in bed,” Knauer said. “I think being 78 and being able to do things and get around is an accomplishment itself. I attribute that to attending cardiac rehab. As long as I feel fine and I’m benefiting, I won’t quit anytime soon.”