The Women of Memorial Health

All five of the hospitals now affiliated with Memorial Health (MH) operated schools of nursing during the 20th century. During the last decades of the 1800s, nursing rapidly became one of the few career options available to “respectable” women, providing them an opportunity to put their skills to work in the world beyond their homes. In 1873, there were only three nursing schools in the U.S. By 1900, there were more than 400. 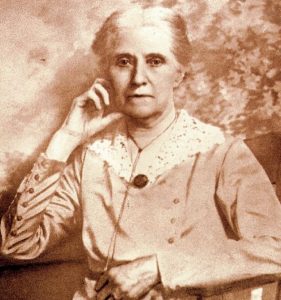 Decatur Memorial Hospital began with a simple question from local resident Sue Hagaman – Why couldn’t babies be born in hospitals? In 1896, Mrs. Hagaman (pictured) and a group of local women launched a campaign to establish a hospital that would welcome mothers, babies and anyone else in need of medical care – culminating in the establishment of DMH nearly 15 years later.

The Decatur Memorial Hospital school of nursing operated continuously between 1916 and 1980, minus a two-year period during the Great Depression when financial issues forced its temporary closure. The first superintendent of the hospital, R. Helen Cleland, was a skilled nurse at Massachusetts General Hospital who moved from Boston in late 1915 to take the job at DMH. While she could be strict, her energy and commitment to providing expert care helped sustain the young nursing students through the crisis of the 1918 influenza epidemic. 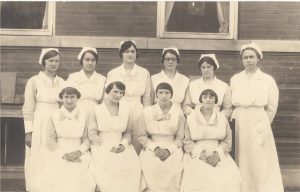 The story of Jacksonville Memorial Hospital (previously known as Passavant Area Hospital) began when a Jacksonville resident, Eliza Ayers, donated her property to benefit the community. Like most hospitals of its era, Jacksonville Hospital (as it was then known) operated a nursing school to educate young women in patient care. More than 950 nurses, like the women seen here, graduated from the school during its 80-year history.

Jacksonville Memorial Hospital operated a nursing school for eight decades, from 1902 to 1982. In its early years, the school had a three-year course that included both practical skills and science courses taught at Illinois College. Students were required to take the “Nightingale Pledge,” named in honor of pioneering nurse Florence Nightingale. In part, it read, “With loyalty will I endeavor to aid the physician in his work, and as a missionary of health, I will dedicate myself to devoted service to human welfare.” 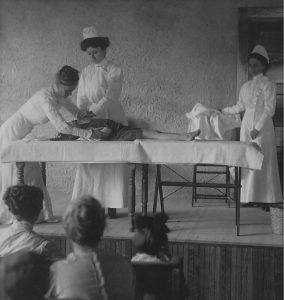 The founders of Lincoln Memorial Hospital (originally named Deaconess Hospital) were inspired by the example of Lutheran deaconesses, who took vows pledging to care for the sick, the elderly and those living in poverty. During the early years, deaconesses worked around the clock to provide medical care to the community, supported by donations of food and resources organized by women from local churches.

Deaconess Hospital (now Lincoln Memorial Hospital) established a nursing school in 1924. Previously, the hospital had operated a training school for deaconesses – Protestant women who took vows pledging to care for the sick, the elderly and those living in poverty. This movement began in Germany and spread to the U.S. in the late 1800s. A group of deaconesses from St. Louis had traveled to Lincoln to care for patients during a typhoid outbreak in 1899, inspiring other women in the community to follow their example. LMH wasn’t the only MH hospital to benefit from the hard work of deaconesses: Jacksonville Hospital also trained deaconesses prior to the founding of its nursing school. 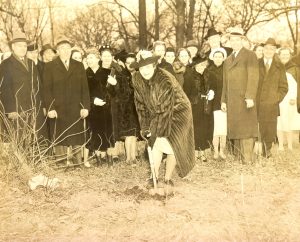 Mildred Bunn was a key member of the board of directors of Springfield Memorial Hospital (previously known as Memorial Medical Center) for 16 crucial years, helping transform the hospital into a modern institution equipped to meet the needs of the community. She was also a leader in the effort to raise funds for a new hospital facility, which opened its doors in 1943.

The Springfield Hospital and Training School (now Springfield Memorial Hospital) maintained a grueling schedule. Their workdays of patient care lasted 12 to 16 hours, plus twice-weekly educational lectures by the physicians and the matron. They received a half-day on Saturday or Sunday for leisure—although they were expected to use the time to attend church or study. In exchange, the student nurses received free tuition, room and board, plus $3 per month for sundry expenses. 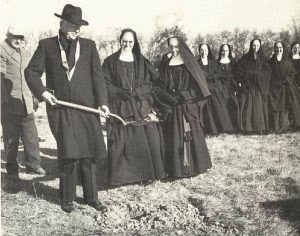 Taylorville Memorial Hospital, previously known as St. Vincent Memorial Hospital, was established in 1906 by the Adorers of the Blood of Christ. These energetic, visionary women guided the hospital from its inception into the 21st century, overseeing expansion projects and outreach to the community. In this image, Mother Mary Dorothy, provincial superior, and St. Mary Jerome, hospital administrator, take part in groundbreaking ceremonies at the site of the present hospital in 1952.

St. Vincent Memorial Hospital (now Taylorville Memorial Hospital) operated a school of nursing for a 15-year period between 1921 and 1936. Like the hospital itself—which was founded in 1906—it was overseen by the Adorers of the Blood of Christ. The Sisters paid little heed to those who said that women were unsuited to the medical profession or the sciences, and the history of the hospital is filled with stories of their vision and determination.