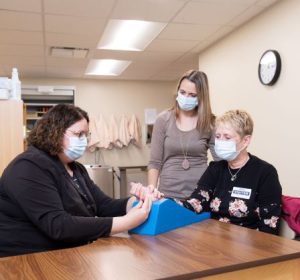 In May 2020, Janet and Bobby Lewis were determined to escape the housebound routine of COVID-19 lockdown. They embarked on a short motorcycle road trip to Hannibal, MO, with two other couples and were approaching the bridge over the Mississippi River when three deer leapt in front of them.

Janet, 69, doesn’t recall even seeing the deer, but they struck two of them traveling 75 miles per hour. The state trooper who arrived at the scene told them they were fortunate to be alive – that most deer-motorcycle collisions end in fatalities. The injuries were extensive, and the road burn excruciating. Bobby severed a tendon in his left elbow and broke his right calf bone while Janet broke her right wrist and hand, and her left foot, ankle and calf were also in bad shape.

“My hand was such a mess,” Janet said. “I had to have that finger reset, and a pin put in. One knuckle was frozen. The stiffness made regular daily tasks really difficult.”

The two worked with different techniques to improve Janet’s hand function including the fluidotherapy machine that used warm ground up corn medium to improve sensory function and tissue mobility of the hand. Lori did specific manual therapy techniques on the hand and had Janet use various items including golf balls to practice rotation and in-hand manipulation. All exercises were designed to help her regain the complex function of the hand.

The therapy was often painful but Janet persevered for two reasons: 1) she wanted to regain the use of her hand and 2) she wanted to make Lori proud because of Lori’s constant encouragement.

“Janet worked so hard,” Lori said. “As hand therapists, we provide the skilled approach needed to identify problems of this complex part of our body and purposefully guide the healing process. The hand is a very balanced and complicated system, and this balance will not just fix itself. The hand therapist guides the process of gaining range of motion, strength, dexterity, sensory processing, scar management and more to ensure the hand can perform functionally and help the patient reengage in life tasks.”

At first, Janet felt stressed and frustrated with the therapy. She wanted to see instant results. But the more Lori worked with Janet, the more progress was made. The more Janet did her homework exercises between appointments, the better her hand became at daily tasks.

“Janet graduated from her hand therapy and within the month had a stroke that caused her to lose all use of the left side of her body,” Lori said. “She was so thankful to have regained the use of the right hand or else she would have been completely helpless. She then completed OT for the left upper extremity and was able to recover use of the left hand as well. She is now independent and living her life again.”

Janet is forever grateful for the care she received across the board from Memorial Health but especially outpatient therapy at JMH. She says, “I have been put back in shape again. If Lori hadn’t pushed me to continue my therapy and to keep doing it and keep doing it, I would have been a real mess with my right side messed up and then my left side paralyzed from the stroke. I always say Lori saved my life. Otherwise, I would have been in a nursing home.”